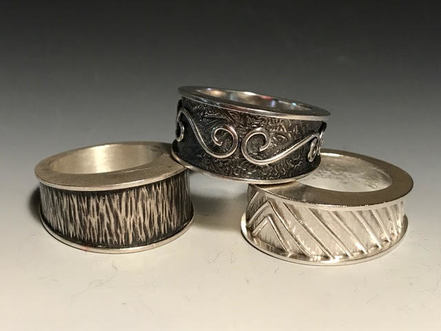 Class Description
If you're interested in homemade tools and bench tricks to speed your production or understanding of goldsmithing this workshop is for you. A loose, eclectic collection of short cuts, bench tricks, stonesetting and polishing hints and alternative equipment options for goldsmiths representing decades of goldsmithing tricks gathered together. Cheap tool making, jewellers secrets and unexpected sources for tools are described.
​
​Prerequisites
students should have a basic knowledge of soldering and sawing

About the Instructor
Master goldsmith Charles Lewton-Brain trained, studied and worked in Germany, Canada and the United States to learn the skills he uses. His work is concerned with Process and Beauty as well as function. He thinks of decision making in metal as drawing, working with the same sensibilities of mark and commitment as when working with pen and ink. Many pieces use a 'printmaking' approach to working metal, that is that the work is done in separate steps in groups and layers building towards the finished piece. Process and the tensions between nature and structure are part of his concerns. His work and writing on the results of his technical research have been published internationally. In 1994 Brain Press was established which documents, publishes and markets the results of his research activities. He has worked on the Cage Series of work extensively since 2001. Images of some Cage work is here Slide Show. He traveled to Thailand to visit Dr. Hanuman Aspler, his colleague, in the spring of 2008. This journey contributed to a major exhibition and catalog (River Trip) and rekindled his interest in chasing. Over 700 images from the journey are here. He also published two major books in 2008, Foldforming with Brynmorgen Press, and The Jeweler's Bench Book with MJSA Press. He spent January 2015 in Chiang Mai, Thailand studying chasers. Since 2012 he has co-juried the Lewton-Brain Foldforming Competition, an international online exhibition organized by the Center for Metal Arts and Sue Lacy.
A distinguished Fellow of the Society of North American Goldsmiths, a member of the Royal Canadian Academy and a Fellow of the Gemmological Association of Great Britain he has lectured and taught in England, Germany, the United States, Canada and Australia. He is a consultant on the jewelry field, and has written expert witness reports regarding health and safety in US legal cases. A short video interview showing foldforming is here. A 2010 online interview with Jay Whaley is here an hour long interview.

​He developed 'fold-forming', a series of techniques new to the metalsmithing field which allow rapid development of three dimensional surfaces and structures using simple equipment. The Rolex Awards for Enterprise chose a project of his on the further development of fold forming for inclusion in a book on innovative developments in science and invention in the world, the Rolex Awards for Enterprise 1991 Edition. He has written seven books, over 15 monographs and published hundreds of articles in magazines as well as book chapters. He translated the monumental 560 page German “Theory and Practice of Goldsmithing” into English. He was on the editorial masthead at MJSA magazine, and has been a contributing editor on a number of books to MJSA Press.

He has lived in Calgary since 1986 and served for 19 years as Head of the Jewellery/Metals Program at the Alberta College of Art and Design and teaches full time, writing articles, exhibiting, consulting and making work. In 1996 he began a web site collaboration with Dr. Hanuman Aspler in Thailand. The Ganoksin Project web site is now the largest educational site in the world for jewelers with over 4 million unique visitors a year who linger for an average of 20 pages and a 12,500 member archived, searchable discussion email list called Orchid. His writing started the site.

Tools and equipment students should bring
Materials kit* $40 *Materials kit purchase is required for all BoMA workshops. The kit insures all students have the same tools and materials require to learn the technique and allows the instructor and the students to focus on the technique rather than the materials.


MAXIMUM NUMBER OF STUDENTS: 10. Students will be required to sign a waiver. Participants must be 18 or older.